If I only had the right voodoo dieting spell

A couple of mornings ago I walked downstairs expecting to have a bowl of Special K cereal. I bought the Special K because I'm positive it has magical weight-loss powers, mostly because of the commercial with the lady walking on the beach. You know. The one where she's covered up in a gauzy little shawl but then oops! The wind blew my shawl away! And then she sassily struts her Special K bod because she's black and skinny and holllaaaaa. That one. Anyway, I'm like Regina George, in that I really want to lose three pounds because my wedding dress, which fits, but I'm convinced that I need to lose three pounds, and until I do nothing is okay and I am a hideous beast and Special K. I had one bowl of it the morning after I bought it and I thought the results should be a bit more noticeable, but then I reasoned with myself and was all, "Maybe you have to eat two bowls. Or perform a voodoo ritual." Point is, I needed more of it. 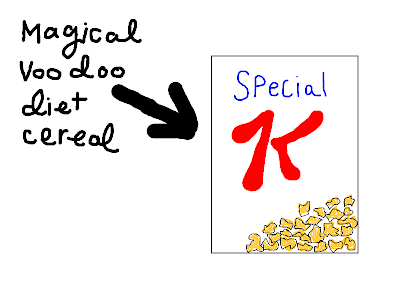 I walked downstairs and my younger brother was eating my Special K. At first I was like whatevs because how much cereal can a 17 year old boy eat? But then I grabbed the box and the answer is "all of it." There were crumbs left at the bottom of the Special K box. I immediately lost my mind.

Me: WHERE IS ALL MY SPECIAL K?
Brother: I ate it.
Me: WHY. THAT WAS MINE AND I BOUGHT IT.
Brother: It's my favorite cereal.
Me: I DON'T CARE IF IT'S THE ONLY KNOWN CURE TO YOUR LIFE-THREATENING DISEASE. THIS IS MY SPECIAL K.
Brother: Oh. Sorry.
Me: WHAT KIND OF HIGH SCHOOL KID'S FAVORITE CEREAL IS SPECIAL K?
Brother: Well, mine.
Me: I BOUGHT THIS YESTERDAY. I NEEDED IT TO PERFORM A VOODOO BODY RITUAL.
Brother: Eh.
Me: BUY ME MORE.
Brother: No.

And I spent the rest of my day fuming. The Special K is only one part in my many part plan to completely alter everything about myself in the month before my wedding. For example, I went to the dermatologist the other day, because I had this weird, dangerous looking bump on my arm. No big or anything. But when I got there, a supermodel wearing a doctor's coat walked into the room and was like, "Hi, what's the problem?" and I was like, "Supermodel, you're in Utah. I think you're looking for Milan. This isn't even the right country." But then she was actually the doctor. And she was like 20. And beautiful. And according to her degree on the wall, she graduated with honors in biochemistry from NYU. I was like, "I WANT TO BE EVERYTHING THAT YOU ARE" but I only said that in my head because it's difficult to express that sort of sentiment while wearing a hospital gown with any amount of dignity.

She zapped the arm thing off because I'm white like Elmer's glue. Except that if you leave Elmer's glue out in the sun for 20 minutes, it has a 78 percent chance of developing skin cancer, whereas I have like an 86. The good thing about this is that I've been able to alternate between wearing sparkly bandaids and Avengers bandaids all week.

I don't even like Special K all that much. If Cookie Crisp or Captain Crunch or Lucky Charms had the ability to make me skinny, I'd do that. But only Special K has that power. Apparently you're supposed to follow some voodoo diet where you don't eat utter crap for lunch and dinner, but one step at a time, amirite? Besides, today I ate like, half a bag of organic cherries after working out, so I think I'm set for a while. Because cherries are good for you. I looked up the nutritional information on the internet.

The point of this entire post was to introduce my new blog project, but I honestly have no idea how I was going to segue into it so how about a jarring and completely misplaced sentence? The new blog is a Tumblr called Relief Society Like Yeah, which is hilarious, but probably only if you're Mormon or go to BYU or are familiar with the culture of one or the other. I can only make so many jokes that are not about BYU parking.

I should probably also tell you that I'm engaged, because I just mentioned a wedding dress and half of you are probably like, "The eff is she talking about?" and the other half are like, "Isn't she like, 19?" Coincidentally, I just did an interview with Emma of SparkLife about being 19 and engaged, so if you'd like to berate me about my wasted life, read that first. Anyway, photographic evidence: 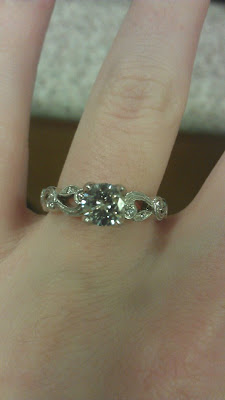 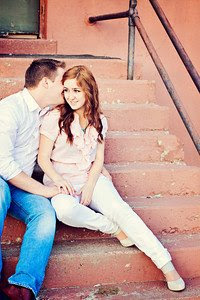 Look at us! Look at how blissfully engaged we are! His name is Eric and I'll probably write about him all the brickin' time now because we spend every waking moment either annoyed with each other or totally kissing. Notice how I chose a picture that doesn't show his face. That's because here is his face: 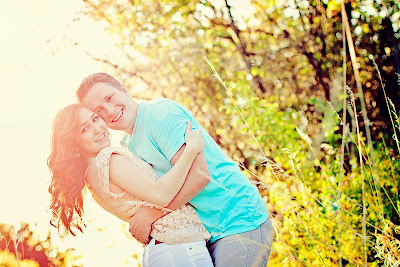 Now if only I can drag myself to the grocery store for more Special K, maybe he won't leave me for my dermatologist.
Posted by Megan at 4:53 PM

Email ThisBlogThis!Share to TwitterShare to FacebookShare to Pinterest
Labels: EXCITING ANNOUNCEMENT, Freakin' ADULT, I'll probably die young, My life isn't all suck, Personal information you did not want to know

Commenting on my blog prevents all types of cardiovascular diseases. Also, all other diseases. And it summons unicorns. So, really, why WOULDN'T you comment?