Annoying stuff that I'm going to rant about, even though I do them all the time. Which is probably why they're so obnoxious to begin with.

There are always these things that people do and I'm all "GAR HOW DARE YOU DO THAT THING THAT IS BOTHERING ME!!!" and then whoever is doing that thing looks at me like I'm crazy just because I'm yelling and sound vaguely like a grizzled pirate. This post is about a few of those things.

1. People who are obsessed with magical unicorn sparkles

This is point number one on the case to get me kicked off the internet, since I'm totally obsessed with magical unicorn sparkles. AND THEREIN LIES THE PROBLEM. See...not everyone can love rainbows and princesses. If EVERYONE did, I would look like a stupid poser. I practically invented unicorn-obsession. I have a reputation to protect. 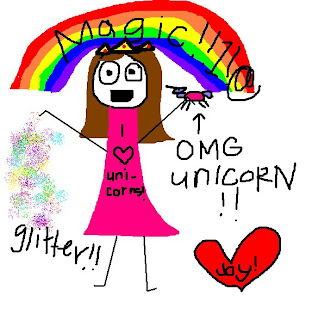 You see, I love glitter. It's my favorite color. I want a pet unicorn. I do. I do so bad. But then some special little...GIRL WHO ACTS LIKE ME comes along and guess what her favorite color is? It's glitter. And how many times has she tried to order a baby unicorn online? 56 times. Which is one more than me. And immediately, I think "you're going down, you fool." 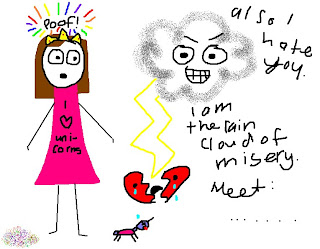 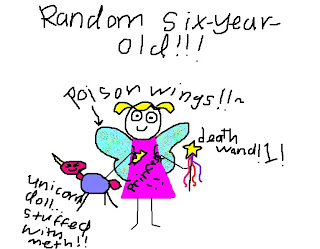 Not. Cool. Get your own interests, kid.
You threaten a six-year-old ONE TIME and suddenly you're not allowed near the children or kool-aid. Whatever.

2. People who awkwardly look at me while I'm driving


I do this all the time. I mean ALL the time. There's hardly anything interesting about other people when they're driving, but if someone magically summons a dragon while driving in the lane next to me, I WANT TO KNOW ABOUT IT.

I just don't like it when people do it to me, because if I actually knew how to summon dragons in my car, I wouldn't HAVE A CAR. I'd have a magical flying dragon. So you don't have to look at me. Nothing going on over here. Except that I think you're laughing at my hair. It's not THAT bad, okay?

And people who watch me while I drive make me feel...uncomfortable. It's like they're waiting for me to kill a pedestrian or forget to use my blinky thingy. (Blinky-majig? Blinkermatron? ...Whatever.) 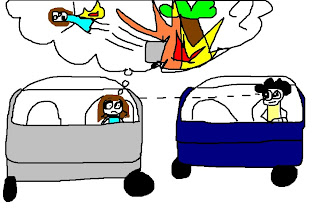 WHY ARE YOU STARING AT ME?! CAN'T YOU SEE THAT I'M UNSTABLE AND AM ALREADY IMAGINING FIERY DEATH AS A DIRECT RESULT OF YOUR STARING, PROBING EYES?! IT'S LIKE THE ANGEL OF DOOM IS EYEBALLING ME IN THE NEXT LANE.

Do I overreact? Never. Except for that one time when my brother and his friend were fighting over a lollipop and it got stuck to my forehead and I started crying in the backseat of the minivan. Or that time when this kid was at my house and he shot a rubber band at my leg, and I immediately started screaming, and, through my tears, I ordered him to leave my house forever. Or that night when I accidentally set the oven on fire making bagel bites, so I sent a bunch of delirious texts to my friend Braeden about how I was going to die and HELP ME FOR THE LOVE OF ALL THAT IS HOLY. I may also have called him, but I don't remember. (In retrospect, maybe that one wasn't an overreaction.)

But when OTHER PEOPLE overreact, I'm suddenly the Superman of All Things Ever. I'm all "Psh! A spider on the wall? I squish wall-spiders every Thursday afternoon, right after swimming with Great White Sharks but before fire-eating practice. You weak, puny, human, with your irrational fears and weak puniness." 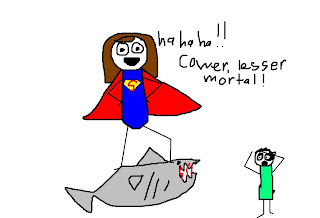 
5. People who get grumpy for no reason


My feelings are tender. When people are grumpy, it makes me want to cry. And shoot them in the head with a machete. And since that's impossible, I want to cry even more. And then nobody is giving me diamonds, and I'm not watching a Disney movie, and the grumpy person IS STILL GRUMPY and I'm all "SHUT UP, I HAVE PROBLEMS TOO, YOU KNOW." 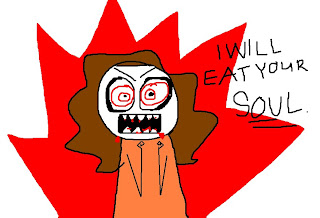 But is it ever okay for other people to be like this? The answer to that is a firm and resolute no. Absolutely not.

When other people are in a bad mood, I have to be all considerate and crap. And even if I am considerate, a grumpy person doesn't care. Dude. I'm *never* considerate. BE HAPPY.

Also, I'm socially incapable, so I'm likely to say something like "Yeah? Well I don't care if you've had a bad day, HOW WOULD YOU LIKE TO BE KARATE CHOPPED IN THE CALF MUSCLE??! HEYAHHHH!" And then I have no friends again.

Another thing I hate is writing when I don't feel like it. 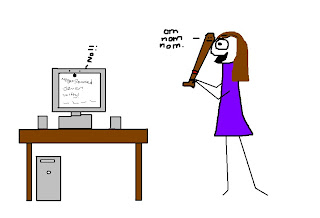 I'm very sure I'll add more to this list...eventually. I hate deadlines.

Email ThisBlogThis!Share to TwitterShare to FacebookShare to Pinterest
Links to this post
Labels: I'm so offensive, Lists of useless crap that no one cares about, Rants about nonsense, Really long titles, Things that would get me fired if I had a job

Twilight: I'm gonna do you a favor, and you can just read this instead.

Skipping the preface, cause it's crap. Basically Bella's all "Aaah! I'm gonna die and stuff!"

Anyway. So Bella Swan is this chick and she's totally not pretty, except she really is, she just thinks she isn't pretty, you know? Bella is also really awkward and clumsy, but it's stinkin' adorable. So anyway, she moves from Alaska or Argentina or something (I forget) and she's all bummed because her mom married a baseball player guy. It's really sad. But it's okay because her dad buys her a truck! And she really likes the truck, even though it's, like, ugly and stuff. It's red.

Okay so fast forward to the next day, Bella has to go to school and she's embarrassed cause her truck is TOTALLY loud. But it's okay because all the other cars are really ugly except for this really shiny Volvo car, and that's cool because a Volvo isn't even that great. So yeah, the truck totally still rocks. So then Bella goes inside and there's some dumb stuff with people or whatever, and this Mike kid really likes her, but then Bella sees this guy named Edward. Bella is really cute because she's so awkward and clumsy.

Edward is really dreamy sexy hot. Bella talks about it all the time, and he has glittering gold eyes that probably ooze unicorns, but Bella never mentions that. I bet it's true though. Bella can be so unobservant. Also, she's awkward, and pretty clumsy.

Edward doesn't really like Bella at first, because she smells YUMTASTIC and he wants to eat her. Because, guess what? This is the best part. You know dreamy sexy hot Edward? Well, surprise twist, he's a VAMPIRE! Only don't worry, he only drinks animal blood instead of human blood and for some reason that makes his eyes sexy hot gold instead of red. Because that makes sense. It's not confusing at all that the type of blood ingested correlates to eye color. I like to drink baby dolphin blood, and that's why my eyes are hazel. So anyway, Edward. He's also very graceful and stuff cause of his vampire powers, which is in direct opposition to Bella, cause she's really awkward. She's also incredibly clumsy.

Oh yeah, bad vampires have red eyes. It's not really important, but that's okay, it is because Edward and Bella are TOTALLY IN LOVE so shut up.

Anyway, so Edward saves Bella from a car that almost squashes her. Then Bella goes to Port Angeles with her friends, and she gets all lost looking for a book store (Bella is really smart, so she needs new books because she's, like...way smart and stuff and she's so DARN CUTE with her awkward clumsiness) and so since she's so freakin' pretty, some guys are all "AAH HEY WE'RE GONNA RAPE YOU!" except they never say that, but it's implied, although it could just be that they need directions to Walmart or the pet store.

So yeah, Edward shows up in his shiny Volvo, and he's really mad about those guys because HE CAN READ THEIR THOUGHTS. Which is cool, and also totally makes sense. But he can't read Bella's thoughts. Because that also makes sense.

So they go to this restaurant and Bella eats and there's a hot waitress and also something with ravioli. I didn't really pay attention at this part. But I think Edward didn't even care about the hot waitress, because that darn Bella is so endearing with her clumsiness. SHE'S AWKWARD. They talk about how Edward is a vampire, and he's all "Bleh! I'm a monster!" and Bella's all "whatever, dude" so that's good because Bella is just SO DANG unique, and because of that she isn't scared.

Then some stuff happens, there's baseball and thunder, because vampires like to play in thunderstorms or whatever. Also, Rosalie doesn't like Bella. Bella also acts clumsy and awkward, and all the boys think it's way hot. And that's about all that goes down, except that Edward and Bella fall mad-hot in love and they stare at each other in the eyes in a magical meadow. So yeah this part was really boring, and it talked a lot about innocence. And lambs. For some reason.

Then they're playing baseball, and these three bad vampires (you can tell because they have red eyes. Told you it was important) they show up and James is all "I'm totes gonna eat Bella!" and everyone's scared and stuff, because delicate Bella is really clumsy and can't defend herself. Then James beats Bella up in a dance studio, and bites her, but it's okay cause he dies, except we don't get to see him die, we just get to listen to Bella complain about being in pain and I'm all "BELLA you're so selfish and awkward! Why are you so clumsy? Why don't you pay more attention to the cool parts, like vampire dismemberment and death?!" So Edward, who is, like, crack-addicted to Bella's blood, somehow sucks all the venom out of her blood and doesn't kill her. Somehow. I'm sure there's an explanation for why that makes sense. ...Look, he's hot!

Bella wants to turn into a vampire at prom because she's an idiot and is all "YEAH MAKE ME HOT AND SPARKLY AND HAVE UNICORN-GOLD EYES!" and she's 17, so she's kind of predisposed to be an idiot. But since she's so vulnerable and cute, it's okay.

And that's the gist of Twilight. It is very romantic and action packed, if you like the sort of action that involves driving kind of fast and talking about innocence. And who doesn't?
Posted by Megan at 9:57 PM 17 comments

Email ThisBlogThis!Share to TwitterShare to FacebookShare to Pinterest
Links to this post
Labels: Don't read this if you like coherency, If you didn't hate me before just wait until you read this, Now you don't have to read this book, Really long titles, Stuff that's only funny to me
Newer Posts Older Posts Home
Subscribe to: Posts (Atom)